The Asteroid Order Form is below

ALTERNATIVELY as my astrology client

You will be emailed a FREE copy of your personal full Asteroid list immediately after you have had a BigView Yogacara Astrology session with me (as your asteroid list has already been calculated for the session).
If you had already bought your list before your astrology session, you’ll receive a free updated copy after the session.

If you are somewhat astrology-literate,
or simply want to see what asteroid names are out there :

Thanks to the dedicated work of the good people at both Cosmic Patterns Software and Astrodienst, I can offer you a pdf file of your personal list of more than 19,000 named asteroids.

Here, and for my own work, I have selected to narrow the output data to Asteroid Name, Zodiac position, and Asteroid ID Number. If you need other fields such as declination, please let me know.

Order your list(s) in: 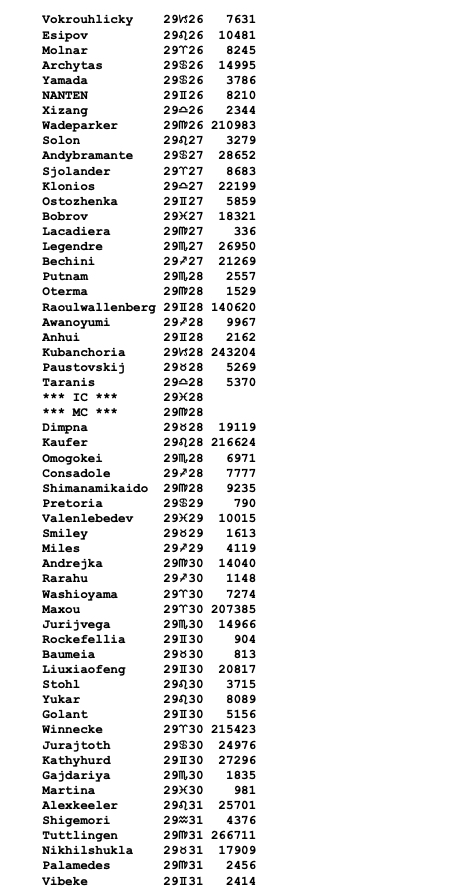 Showing here the asteroids together that are aspecting the MC and IC from various Signs by all Aspects that are multiples of 30-degrees.
More Aspecting asteroids (within a 2˚ orb) would be on the preceding and following pages (there are approximately 53 asteroids listed for every degree of the zodiac—not all will be relevant!).
The PDF can be in either A4 or Letter sized pages.

Zodiac Order
Vital, as it allows you to quickly find the resonant asteroids closely Aspecting your planets and Sensitive Points by checking a 2˚  sweep on either side of a planet or Point (planets and Sensitive  Points positions are listed in this sort amongst the zodiac positions of the asteroids). With basic astrological skill, you can then scroll to the zodiac position of any Aspect you choose, to see what asteroids are there.
Example: a planet at 3˚  Aries will have squares to it at 3˚  Cancer and 3˚  Capricorn, so scrolling to those latter two positions will reveal all the asteroids squaring that planet — but remember, only the significant asteroids will relate to the basic chart dynamics — they must make sense to the chart’s story — so not all asteroids at those points will be relevant.

30˚  Sort Listing
Valuable for seeing all the significant asteroids together that are Aspecting a planet or Sensitive Point from any of the Aspects that are multiples of 30˚  (being the the sextile, semi-sextile, square, trine, quincunx, and opposition, as well as the conjunction, of course). I use this sort to display all the harmonic aspects of the 360˚  chart, which are vital for finding the paths to inner harmony — for the astrologically savvy!

45˚  Sort Listing
May suit you better than the 30˚  Sort if you are principally working with Uranian Astrology or Ebertin’s Cosmobiology, especially for 90˚  dials.

Alphabetical Lists
My Parallels/Mac setup is calculating Alphabetical listings again! So I’ve added this back into the List options. An Alphabetical list on its own will not help you find the asteroids resonating in your chart, so I’ve included it as a bundle with the Zodiac List.
And Alphabetical listing is not strictly necessary, as you can use the ‘Find’ button in your pdf viewing app (such as Preview on Mac; or Adobe Reader and even the Kindle desktop app on Windows) to search for the names of any asteroid you’re looking for in the Zodiac listing — you can try by typing a few letters, as some spellings are in foreign languages (the more common ‘Tutankhamun’ is spelled Tutenchamun as an asteroid), as are surnames (such as ‘Devine’) which do work phonetically in the chart. If you want to search for a very short word such as Ur (an ancient city of Sumer), use inverted commas, as in “Ur” in the search field, to avoid displaying every asteroid that has ur in its name!

Making Margin Notes
There is enough white space beside the asteroids for notes:
In Preview (Mac) click the Markup icon, then the Text icon to write a note in a text box and slide the box to be beside the relevant asteroid. Highlight the text to format the font in the text box only (for size, font family, and colour).  I type aspects notes there. If you have an Apple Pencil on an iPad you may be able to scribble notes into that wide margin. (As a Mac person, I’m not sure what you can do to edit PDFs in Adobe etc on Windows now.) You can also colour-highlight the asteroid names that are significant as you find them — easier to spot them later in the list.

Searching for Meanings
Try right-clicking on an asteroid name (works on a Mac) to quickly access a search for the asteroid name in Google, a Dictionary, or Wikipedia. Asteroid names can work more personally rather than for their intended meaning, so do a general search first. (More in my forthcoming book series and in my imminent online courses.)

Please Consider !
Contrary to popular practices, asteroids that do not Aspect planets, the luminaries, or Cardinal and Sensitive Points or the Eight Transneptunian/Uranian Points, are not relevant — remember, asteroids qualify the planets and Points they contact. Not all asteroids will resonate in every chart! … just as not every word in a dictionary will appear in every book, and not every key on the piano will be played in every composition.
Also, keep all asteroid orbs to within 2°! Their effect tends to fall off after that.

Printing?
I don’t recommend you print the list, as it’s more than 300 pages! You’ll need almost a reem of paper and a goodly dollop of ink!

for Your ASTEROID LIST(s) Order

OR Instant Cash Transfer (Australia only)
via PayID (explanation ↑)
on the Osko/PayID page
of your banking institution’s website/app,
using only my name & phone number:

Thank you.
I’ll get onto your list(s) asap!

Look out for my email
(containing my name in the address)